In my dissertation, I seek to investigate the roots of poverty and economic inequality in Tanzania and analyse how growth, inequality, and poverty interact in the country in four interrelated papers. Throughout the dissertation, the colonial period takes a prominent role, since a better understanding of the trends in inequality and living standards under colonial rule are crucial to tackle the overarching themes.

To estimate inequality and living standards in the colonial era, social tables provided an invaluable tool. As in most sub-Saharan African colonies, the absence of comprehensive income tax records and household budget surveys for that period make the use of contemporary estimation techniques nigh impossible. Here, social tables provide a solution, as they allow us to estimate inequality using grouped income data, which is much more readily available.

The social tables method provided the starting point for the first paper, which analyses income inequality trends in the wage sector under British rule. The overall level of income inequality was relatively high, in line with levels seen in settler colonies like Kenya, and mostly driven by racial income differences between Europeans, Asians, and Africans (see Figure 1). The root cause of these income differences were of an institutional nature: racial discrimination and a lack of educational provision by the colonial authorities. These barriers also impeded African advancement more generally. While they were slowly being dismantled after World War II, they had a long-term negative impact on Tanzanian economic development. 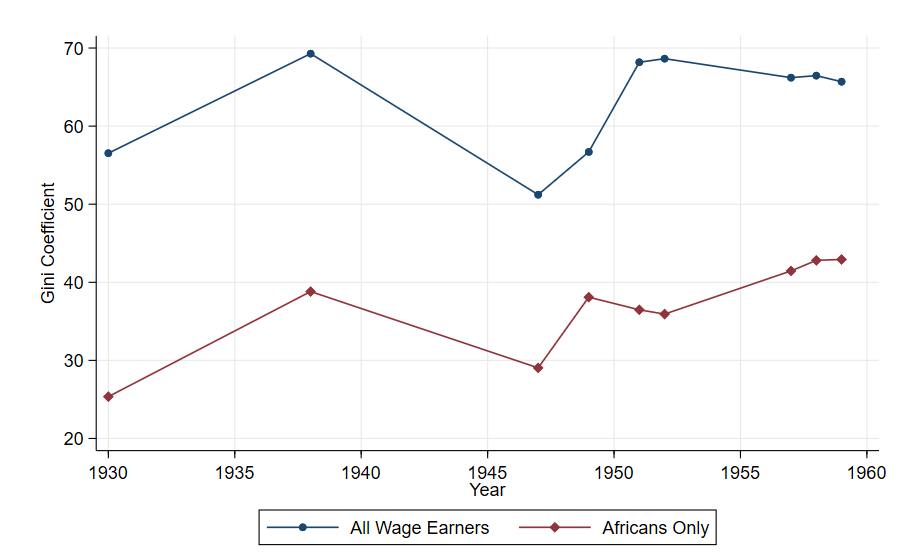 The second paper investigates overall rural living standards in Tanzania under British rule as well as inequality dynamics amongst African cash croppers. We have seen in other cases, such as Ghana or Uganda, that cash crop production and an increasing commercialisation of agriculture led to both increasing living standards and inequality amongst African farmers. Tanzania was no different, although regional-level social tables show that levels and trends in income inequality varied depending on the underlying social and institutional structures in different regions. Higher levels of inequality did, however, not always preclude an increasing participation of smaller growers in the coffee economy or an overall increase in welfare for the entire population – in fact, it was often the areas without notable cash crop production that saw the least improvements in general welfare.

The third paper, co-authored with Maria Fibaek and Erik Green, widens the geographic scope and provides a comparison of rural real wages and their determinants in Tanzania, Kenya, and Malawi from 1920 to 1960. We investigate whether the presence of more settlers led to lower wages, as is often argued in the literature. We find that, while more settlers meant the implementation of more coercive labour policies, the continued expansion of settler agriculture in Kenya and Malawi led to a growing demand for labour and a long-term increase in rural real wages. In Tanzania, in contrast, the lack of colonial policy support for settlers resulted in stagnant employment numbers and stagnant real wages throughout the colonial period.

The final paper, co-authored with Morten Jerven, moves away from the colonial period and investigates the interrelations between growth, inequality, and poverty (G-I-P) from independence in 1961 to the present day. We observe two distinct growth periods in Tanzania, from 1961 to the late 1970s, and from the mid-1990s to the present. Both led to a decline in poverty, but the gains from the first growth spurt were all but reversed during the economic collapse of Tanzania beginning in the late 1970s. We also find that the inequality-growth relationship is not straightforward: policy regimes and development strategies played a crucial role in determining its precise nature. For example, the policy regime of African Socialism in the 1960s and 1970s led to a decline in income inequality both during the growth and economic decline, while the recent growth episode led to increasing inequality.

Overall, I find a complex relationship between growth, inequality, and living standards in Tanzania. Levels of economic inequality in Tanzania generally appear low, but this is primarily a consequence of a low level of economic development. The macro perspective also obscures high degrees of economic inequality in different parts of the economy like the wage sector and cash cropping. Attempts to increase the speed of development and/or reduce the level of inequality were rarely successful, as they often failed to overcome the fundamental cause of inequality and persistently low living standards: the lack of economic opportunities.
Since the turn of the millennium, however, there has been a change in the pattern. The available evidence suggests that, finally, economic opportunities have expanded significantly across the board, and that this expansion of opportunities is one of the main drivers behind the latest growth spurt and significant reductions in poverty.

This website uses cookies to improve your experience while you navigate through the website. Out of these cookies, the cookies that are categorized as necessary are stored on your browser as they are essential for the working of basic functionalities of the website. We also use third-party cookies that help us analyze and understand how you use this website. These cookies will be stored in your browser only with your consent. You also have the option to opt-out of these cookies. But opting out of some of these cookies may have an effect on your browsing experience.
Necessary Always Enabled
Necessary cookies are absolutely essential for the website to function properly. This category only includes cookies that ensures basic functionalities and security features of the website. These cookies do not store any personal information.
Non-necessary
Any cookies that may not be particularly necessary for the website to function and is used specifically to collect user personal data via analytics, ads, other embedded contents are termed as non-necessary cookies. It is mandatory to procure user consent prior to running these cookies on your website.
SAVE & ACCEPT